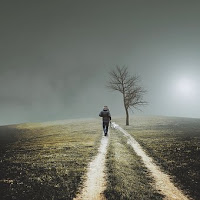 It is only when you try to stop that you realize how fast you have been traveling. Try driving a car at 100 miles per hour and then applying the brakes and you will know what I mean. There is a story about a traveler who planned a safari to Africa. He had worked everything out in terms of his journey and how long it would take him and he had a clear agenda about all the things he planned to do. Some local people had even been hired to carry some of the traveler’s supplies as they trekked throughout the land—it was that level of planning.

On the first morning, they all woke up early and traveled fast and covered a great distance. The second morning was the same—woke up early, traveled fast, and traveled far. Third morning, same thing. But on the fourth morning, the local hired help refused to move. Instead, they sat by a tree in the shade well into the morning. The traveler became incensed and irate and said to his translator, “This is a waste of valuable time. Can someone tell me what’s going on here?” The translator looked at him and calmly answered, “They’re waiting for their souls to catch up with their bodies.”

When you stop doing what you have been doing for a long time, whether through illness, sabbatical leave or retirement, it is often then and only then that you realize how much of a rush you have been in and how fast you have been 'living' life. (I say 'living' when the question must be asked if that is really living, in the fullest sense of the word).

There is something insidious about the way that life, and the speed of modern day living creeps up on you and slowly compels you to keep in step with its frenetic and frantic pace. Whether that is because of the sheer number of things you need to do or the way in which the the loudness of the urgent seems to eclipse the quietness of the important. If we fail to distinguish between the two then guess what, we up our speed to keep up with the urgent and lose the important several miles back.

"Walk by the Spirit" or in some translations "keep in step with the Spirit." How fast does the Spirit walk? Slow. Slow enough for Him to speak with us and for us to hear Him.

In my college days I remember reading a fascinating collection of essays by Kosuke Koyama a Japanese Christian titled "Three Mile an Hour God". His contention in the title that God moves slowly - at relaxed walking pace - is an antidote to the Western tendency towards busyness and rush, where everything must be done now. It's the world of instant coffee, microwave ovens and pot noodles. But God cannot be hurried. He will not speak to us if we won't slow down long enough to engage with Him, or if we are trying to divide our listening between Him and something else we are doing. No we must "be still" is we are to know Him as God says Psalm 46:10. We must not expect Him to move at our pace and try and keep up with us. We must slow down to be with him in the fullest sense of the word. We are followers not pace-setters.

This is something I have learned the hard way over the past months. Finally my soul has caught up with me as I have stopped galloping along. I pray that I can take this on when I return to work.


Posted by Mark Williams at March 30, 2017 No comments: Links to this post

Email ThisBlogThis!Share to TwitterShare to FacebookShare to Pinterest
Labels: be still and know, three mile an hour God 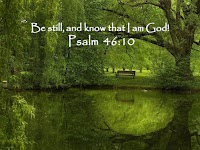 I have no idea where this is from or by who, but I had scribbled down on a piece of paper and sharing
it now with you.

In times of darkness, love sees….
In times of silence, love hears …..
In times of doubt, love hopes …
In times of sorrow, love heals …..
And in all times, love remembers.
May time soften the pain
Until all that remains
Is the warmth of the memories
And the love.
Posted by Anonymous at March 30, 2017 No comments: Links to this post