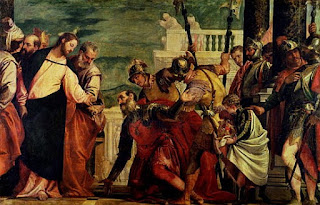 The climax of our account of the healing the centurion’s servant comes in verse 9 where Jesus says of the centurion: “I tell you, not even in Israel have I found such faith.” Jesus receives a request to heal the faithful servant of a Roman officer but before he gets there is told by some friends sent by him that one word or command is enough and he knows his servant will be healed. Such faith startles Jesus. It was greater than anything he had found among God’s own people.

"What is faith? It is not some elusive commodity, available only to the lucky few. It is simply a response to a given set of factors. E.g. I look at a railway timetable and get on the train. I am offered a chair and I sit down. Faith has been exercised.”

In other words, for someone to have faith, they must first have information upon which to base that faith. A "given set of factors". In the account of the healing the centurion knows something about Jesus that enables him to feel he can put his trust in him to heal his servant. Look at the text:

1. First as Jesus makes his way some friends, speaking in behalf of the say:

“Lord, do not trouble yourself, for I am not worthy to have you come under my roof; therefore I did not presume to come to you”. (v6)

The centurion was an officer serving with the occupying forces in Israel and therefore not subject to anyone except his commanding officer and the emperor. And yet here he speaks with great deference to Jesus calling him his “Lord” and expressing his unworthiness to have Jesus even step foot in his house. He obviously sees in Jesus someone who is his superior in every way.

2. Second he says: “But say the word” or in the KJV “say in a word” and let my servant be healed.”
Again this is a remarkable statement where he acknowledges Jesus’ power and ability to heal by just saying a word. One word from Jesus is sufficient for his servant who is sick and at the point of death (verse 2) to be restored to full health.

3. Finally, he says to Jesus: “For I also (NKJV) am a man under authority…”
Just as he has the authority invested in him by none other than the Roman Empire to give orders to those under him, so he sees in Jesus a far greater authority—the authority of the Kingdom of Heaven—to heal sickness and deliver from death. In other words the Centurion’s faith comes from the fact that he somehow knows who Jesus is—that he is Lord, he has the power to heal at a word, and has the authority of heaven. He has been given this information—this given set of factors—and on what he knows/has been revealed to him, he has made the decision to trust Jesus.

You see God does not expect us to conjure up faith for ourselves from the air. If we seek truly Him, then He will provide us the information that we need – what the Bible calls revelation—in order for us to exercise faith and trust.

Listen to what Paul writes to the Church in Corinth. We need to listen carefully to what he says:

7 The wisdom I proclaim is God's secret wisdom, which is hidden from human beings…..8 None of the rulers of this world knew this wisdom. If they had known it, they would not have crucified the Lord of glory …...10 But it was to us that God made known his secret by means of his Spirit. The Spirit searches everything, even the hidden depths of God's purposes. 11 It is only our own spirit within us that knows all about us; in the same way, only God's Spirit knows all about God.  12 We have not received this world's spirit; instead, we have received the Spirit sent by God, so that we may know all that God has given us.” 1 Corinthians 2:7-8 & 10-12

Basically what Paul is saying is this. Unless God reveals Himself to us through His Spirit, then we will not have access to the information we need—here he calls it wisdom—upon which to exercise faith. This is what we see here in Luke. God in some way revealed to the centurion who Jesus was. And it was on the basis of this information/revelation that the centurion was able to trust in Jesus as Lord, in his word as power and in his authority as absolute. God saw in the Centurion someone who was truly seeking him and so he revealed himself to him and he responded in faith.

If we truly seek God, he will do the same for us. It is up to us then, to respond in faith and find healing and deliverance from death. It is then by faith, we will be saved.
Posted by Mark Williams at October 19, 2016