The Russian Bishop, Billy Graham and the Church in Wales

Bishop Hilarion is the representative of a Church which has consistently - along with the Roman Catholic Church and most evangelical churches - stood resolutely against gay marriage, something sadly that more and more churches in the West are giving way to.

During his visit the Metropolitan also delivered this speech to a group of Evangelical leaders gathered in North Carolina. He spoke of the Russian Orthodox Church’s history of good relations with North American churches, but said that it will not have anything to do with churches that make fundamental compromises on Christian morality.

He said this is why Moscow broke relations with the Episcopal Church after it ordained the gay and uncelibate V. Gene Robinson as bishop.

"The Russian Orthodox Church consistently states that for her any double standards with regard to Christian ethics or any experiments with the ethical component of our faith are unacceptable.
The so-called ‘liberal theology’ clearly conflicts with the apostolic heritage. First of all, it concerns the introduction of the practice of prayer for so-called ‘same-sex couples’, even if such a prayer is not formally equated with the celebration of marriage, which in the Church’s view can be concluded only between a man and a woman.

Liberal Christians have often maintained that society needs to preserve stability. However, what stability can be preserved by ‘blessing’ a sin? The Church has always been called to proclaim the truth of Christ and condemn sin, even in defiance of the demands of the society and ‘the powers that be’.

Did Christ try to adapt His message to the standards of this world? Did He promise the apostles stability and comfort? Did he promise them that their preaching would be a success? Let us listen to what He says to the apostles, when he sends them out to preach: ‘I am sending you out like sheep among wolves. Be ye therefore wise as serpents, and harmless as doves. But beware of men: for they will deliver you up to the councils, and they will scourge you in their synagogues; And ye shall be brought before governors and kings for my sake, for a testimony against them and the Gentiles.
But when they deliver you up, take no thought how or what ye shall speak: for it shall be given you in that same hour what ye shall speak. For it is not ye that speak, but the Spirit of your Father which speaketh in you. And the brother shall deliver up the brother to death, and the father the child: and the children shall rise up against their parents, and cause them to be put to death. And ye shall be hated of all men for my name’s sake: but he that endureth to the end shall be saved’. (Mt. 10:16-22)
How little does this resemble the discourse of today’s liberal Christians who seek to adapt the Church to the standards of this world, to make it tolerant, not towards people, not towards sinners, but towards sin. Sin is elevated to the dignity of a norm and to this end even the words of Jesus and His apostles are rewritten and re-interpreted.

We do not at all insist that the Church should refuse to help sinners. Christians are obliged to pray for all sinners and to wish them salvation. The Church should treat any individual with pastoral responsibility regardless of his or her sexual orientation. But the Church cannot bless a vice. She cannot reform the norm of faith as sealed in the holy Gospel and the letters of the apostles."

In 2011,  Hilarion spoke to a large group of Presbyterians in Dallas. He was warmly received, and talked about how Orthodox and morally conservative Protestants can and should work together to defend our common heritage under assault from secular liberalism — even within the churches.

Many mainline Protestant churches are giving way to liberalism both in America,and here in Britain. Only yesterday the retiring Archbishop of Wales spoke again of his desire to see the Church in Wales marry gay and lesbian people, despite the fact that just a year ago the motion was thrown out of the Governing Body. Our only hope - a forlorn one - is that whoever succeeds him will resist the call.

Personally I can't help thinking that if the Church in Wales does go down this route it will be the straw that will finally break its back. Its decline will accelerate and spell the end for it. Here are the recent figures on attendance etc: 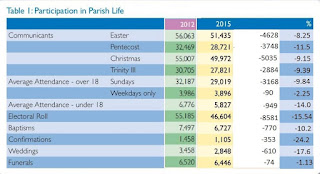