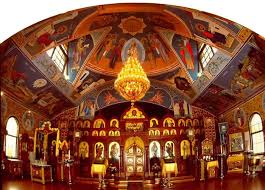 St. James in the Uplands, Swansea is currently hosting the Coptic Orthodox Church on the occasional Saturday with plans possibly to make this, at least in the shorter term, more permanent. So I thought I would include on this blog a brief description and summary of Orthodox beliefs courtesy of 'About Religion':


The word orthodox means "right believing" and was adopted to signify the true religion that faithfully followed the beliefs and practices defined by the first seven ecumenical councils (dating back to the first 10 centuries). Orthodox Christianity claims to have fully preserved, without any deviation, the traditions and doctrines of the early Christian church established by the apostles. This is why they believe themselves to be the only true and "right believing" Christian faith.

The primary disputes that led to the split between the Eastern Orthodox and the Roman Catholic Church centered around Rome's deviation from the original conclusions of the seven ecumenical councils, such as the claim to a universal papal supremacy. Another particular conflict is known as the Filioque Controversy. The Latin word filioque means "and from the Son." It had been inserted into the Nicene Creed during the 6th century, thus changing the phrase pertaining to the origin of the Holy Spirit from "who proceeds from the Father" to "who proceeds from the Father and the Son." It had been added to emphasize Christ's divinity, but Eastern Christians not only objected to the altering of anything produced by the first ecumenical councils, they disagreed with its new meaning.

Eastern Christians believe both the Spirit and the Son have their origin in the Father.

One clear distinction between Orthodoxy and Protestantism is the concept of "Sola Scriptura." This "Scripture alone" doctrine held by Protestant faiths asserts that the Word of God alone can be clearly understood and interpreted by the individual believer and is sufficient on its own to be the final authority in Christian doctrine. Orthodoxy argues that the Holy Scriptures (as interpreted and defined by church teaching in the first seven ecumenical councils) along with Holy Tradition are of equal value and importance.

Another less apparent distinction between Eastern Orthodoxy and Western Christianity is their differing theological approaches, which perhaps is simply the result of cultural influences. The Eastern mindset is more inclined toward philosophy, mysticism, and ideology, whereas the Western outlook is guided more by a practical and legal mentality. This can be seen in the subtly different ways that Eastern and Western Christians approach spiritual truth. Orthodox Christians believe that truth must be personally experienced and, as a result, they place less emphasis on its precise definition.

Worship is considered the very center of church life in Eastern Orthodoxy. It is highly liturgical, embracing seven sacraments. It is characterized by a priestly and mystical nature. Veneration of icons and a mystical form of meditative prayer is commonly incorporated into their religious rituals.