Lead me to Rock that is higher than I 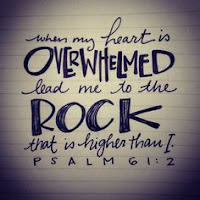 So we have taken the step of leaving Europe. I can't say I am surprised. Not because I voted out - I voted remain - but because there has been for some time, a growing disconnect between the Government in particular - and politicians in general - and the people whose interests they claim to be concerned about. Rising fears about immigration - unfounded I think - and the demise of the NHS, as well as the immorality of the banks and the inability of our education system to teach people to actually think rather than just pass exams, have all conspired together to create an environment of fear and distrust so that when the Prime Minister and all his supporters - many from big business and banking as well as Europe - say trust me and stay, the majority took no notice and did the opposite!

In addition there is this growing move towards bigger government, centred in the European Parliament, and which has the effect of taking government further away rather than closer to the people. And the figures bandied about, about how much we are paying towards all this, has only reinforced that concern that we are paying for something - and someone - we can't see and don't know.

I was interested to read the following quote from today's Times:

"The British referendum had already forced even Jean-Claude Juncker, the arch-federalist president of the European Commission – the institution which proposes all those directives and regulations – to admit that the EU meddled too much in everyday life."

And that is what people are perhaps rebelling against? This fiddling from afar by people who don't, many feel, fully represent the man and woman in the streets of Swansea or Manchester.

Those on the far right, sadly, have fed into this. Their xenophobic views which, although not outright racism, has enough distrust of the foreigner, to get very close to it. They have tried to blame all our ills on honest people who have travelled far from home and loved-ones to make a better life for themselves, something no doubt we would have done if we were in their shoes. Without such workers we would have been - and will probably end up being - in a mess with regards to people who are willing to work hard for a living, something which, let's be honest, some of our own folk are not always interested in doing.

Whatever the reasons for the vote - and the above is, after all, a bit of educated guess-work mixed in with listening to conversations and reading articles - the point of this blog is to ask where is God in all this?  And the answer? The same as it has always been, with us.

Listening to some people - the panickers and the so-called pragmatists - this is the end of the world and the only option is to find some island or country somewhere where bad things like this don't happen and their children will be safe. Good luck with that. Like the perfect church, it does not exist and to go there would, in any case, spoil it.

No age has been without its turmoils, its compromises and its challenges. Thinking back to my parent's generation they had to contend with the aftermath of a devastating First World War and the onset of another in the Second. And came through it. How? Although it is unfashionable to say it, I believe that whatever the strength of their faith in God, or their lack of it, there was still an underlying optimism that God would see them through. And whether their fading religious practices meant something or not to them, the Christian Faith still spoke of faith casting our fear, good overcoming evil and love conquering hate.

In a brief text conversation with one of my daughters who exclaimed despair at what has happened, I sent a verse that popped into my head from Psalm 61:2. It reads:

"lead me to the rock that is higher than I."
Who is that rock but God. And as governments have come and gone, politics have promised and failed to deliver and ideas that are sold as the solution to all suffering have actually caused the opposite, God remains the one rock that is steady in the storm. Where else have our ancestors turned to find a "present help in time of trouble" (Psalm 46)?

And so looking at the disaster which is the decision to leave Europe, although it is not good, God is, and if we trust in him He will lead and guide us still. "All things really do work for good" (Romans 8:28) for those who will not forget that, and that is why, despite the results, I am, and will continue to be, optimistic.