Another yard on the slippery slope? 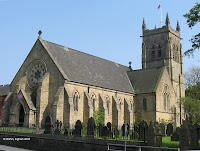 Recently it was announced that the Church of England is to allow clergy in civil partnerships to be bishops.

In a statement issued by the House of Bishops it said: "The House has confirmed that clergy in civil partnerships, and living in accordance with the teaching of the Church on human sexuality, can be considered as candidates for the episcopate."

There had been a moratorium on clergy in civil partnerships being considered as candidates for the episcopate over the past year and a half while the working party undertook a review of the issue.

The statement from the House of Bishops continued: "The House believed it would be unjust to exclude from consideration for the episcopate anyone seeking to live fully in conformity with the Church's teaching on sexual ethics or other areas of personal life and discipline.

"All candidates for the episcopate undergo a searching examination of personal and family circumstances, given the level of public scrutiny associated with being a bishop in the Church of England.

"But these, along with the candidate's suitability for any particular role for which he is being considered, are for those responsible for the selection process to consider in each case."

While it does on the surface seem to be a right move in terms of doing justice to those who are in a celibate relationship with a member of the same sex and it does try and be seen to be non-judgemental I am afraid it is not a wise move. Why?

First, of all it is rather naive as it assumes that people who previously were engaged in sexual activity could somehow switch off their desire for one another.

Second, in some ways this is just as unfair as previously denying those in a same sex relationship ordination to the priesthood and consecration as bishops as it denies one 'right' in order to provide another. Two wrongs don't make a right and neither - in this case - do two rights make a right! Sexual attraction is a very powerful thing and whatever the rights and wrongs of its expression to deny its exists or to assume that it will no longer exist is foolishness.


Third, how can anyone possibly be able to enforce it, a question raised by the former Bishop of Rochester, the Right Reverend Michael Nazir-Ali. He says: "In the context of same-sex relationships, what exactly does ‘celibacy’ mean?" he said.

"Does the admission of those in civil partnerships to the episcopate, who state they are celibate, include those who were previously in actively homophile relationships including with their present partner?

On a personal note this latest development is putting further strain on my relationship with a church I was baptised in, confirmed in, came to faith in and have served as an ordained member of the clergy in for 26 years. Is there a place for people like me who, although progressive in many ways and committed to making the Gospel relevant to an unbelieving society is very much committed to the traditional teaching of the Church on matters of doctrine etc. as well the authority of the Bible. At what point will enough be enough?

Email ThisBlogThis!Share to TwitterShare to FacebookShare to Pinterest
Labels: bishop, celibacy, Church of England, Civil partnerships and the episcopate