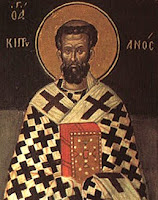 Cyprian was born in Carthage, N. Africa from a wealthy pagan background. Before becoming a Christian he was an orator and a teacher of rhetoric. We don’t know the date of his conversion but two things stand out when we consider his change of heart. First, after his baptism circa 245-8 he gave away a portion of his wealth to the poor in Carthage, and second, he took the additional name of Caecilius in memory of the presbyter to whom he owned his conversion (a presbyter was the ancient and original title of what we now call a priest).

Not long after his baptism he was ordained deacon and soon after presbyter and some time between 248 and 249 he was elected bishop. He was a popular choice among the poor although there was opposition among the church hierarchy.

His election was followed by what has become known as the “Decian persecution” when pressure was put on all bishops and church officers to sacrifice to the emperor. On the face of it, it would have been a simple thing just to do what was expected, make the sacrifice, and get on with it, but to the Christians such as Cyprian, this was unthinkable. There is only one Lord and one God, and to acknowledge the Emperor as God—which was what the sacrifice meant - was to deny God. So rather than do that Cyprian, with others, fled Carthage.

But the persecution divided the church between those who gave in and those who capitulated. Because Cyprian ran away it was seen as cowardice and Cyprian’s enemies in the church accused him at Rome. Cyprian’s defence was that he ran away because he had received various visions and commands from God to tell him to, but I obedience to Rome he returned after 14 months and stayed faithfully serving his people until another persecution flared up under Emperor Valerian and both Pope Stephen 1st and Pope Sixtus 2nd were martyred in Rome.

This time Cyprian stayed and refused to sacrifice to the pagan deities and firmly professed Jesus as Lord. He was banished to Curubis where he continued to encourage his flock through various writings and epistles. In a vision he saw his approaching fate and after a year he was recalled and put under house arrest in his own villa. On September 13th 258 he was imprisoned he returned to his villa where he was cross examined and sentenced to die by the sword. His only answer was “thanks be to God”. The sentence was carried out in an open place near the city in front of a large crowd. After removing his own garments he knelt down and prayed and after blindfolding himself he was beheaded. His remains were buried near the spot and later various churches erected although Charlemagne is said to have had the bones transferred to France.

There are a few lessons we can draw from his life:

1. Although Cyprian later refers back to his baptism as the moment he received grace from God to believe and live the Christian life he also acknoweledges that baptism alone is not enough—there has to be a corresponding change of heart leading to a change of life. God’s grace must be met with man’s—and woman’s—willingness to believe and trust in Him on a daily basis.

Second, Cyprian was known in his lifetime as a defender of the faith. In his writings and in his preaching he vigorously defended Christianity against the pagan world. And even though he was
gifted as a speaker and thinker, he still had to learn about his faith so that he knew enough to “give a reason for the hope that was within (him).” (1 Peter 3:15.) So must we all, now more than ever, be ready to speak for Christ, when the time comes or the opportunity arises.

Lastly, Cyprian was a realist about the world and it’s problems. Listen to this extract from one of his writings to a pagan called Donatus:

"This seems a cheerful world, Donatus, when I view it from this fair garden under the shadow of these vines. But if I climbed some great mountain and looked over the wide lands, you know very well what I would see. Brigands on the high road, pirates on the seas, in the ampitheatres men murdered to please the applauding crowds, under all roofs misery and selfishness. It is a really bad world, Donatus, an incredibly bad world. Yet in the midst of it I have found a quiet and holy people. They have discovered a joy which is a thousand times better than any pleasure of this sinful life. They are despised and persecuted, but they care not. They have overcome the world. These people, Donatus, are the Christians… and I am one of them.

Louis Armstrong was right that this is sometimes a wonderful world but it is not perfect- far from it - and we need to keep on working with God to make it better.
Posted by My name is Mark Williams. at September 13, 2011