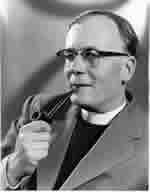 I am at present reading J.B.Phillips' autobiography called "The Price of Success" and in Chapter 4 I came across an interesting passage about prayer which prompted me to think a little more on the subject. In Chapter 4 Phillips talks about his early days as a Christian powerfully influenced by the evangelical wing of the Anglican Church. He describes himself, aged 19, as someone "with a newly acquired faith of an almost literal kind." It was a time, he writes, hwen "the promises of God recorded in the Bible were true and meant to be apprehended by any believer." On this particular occasion Phillips writes: "..I found myself almost literally penniless, and certainly unable any longer to pay the very modest fees of our mission houseparty." (He was running a beach mission at Overstand, Norfolk, with members of the Christian Union). He continues: "I was wandering on the beach one evening and I suddenly thought, Christ said, "Ask and it shall be given you," so why not ask? So I did, with simple naive childlike faith, and within two minutes I saw an unusually bright sparkle shining on a bank of shingle in the setting sun. I ran forward and picked up a ring with a very large sapphire mounted on it. On my way back to the house in which we were staying I had to visit the village post office. And there, for everyone to see, was a large notice offerng "£20 reward for teh recovery of a valuable sapphire ring." My heart leapt in thankfulness and I went straight to the hotel of the owner of the ring. Needless to say he was delighted, and on hearing that i intended to give half the reward to the mission, he unhesitatingly increased it. It must have been a very valuable sapphire indeed, but much more valuable to me was the fact that God Himself had heard mu desperate prayer and had immediately answered it. I have had many answers to prayer since but none so rapid and demonstrable."
The Price of Success: J.B.Phillips pages 61-62


A few reflections:
1. Phillips seems to be a little disparaging of his "newly acquired faith of an almost literal kind" yet at the ame time acknowledges the "simple naive childlike faith" that it elicited.  Isn't there a connection between the two? Aren't we in danger sometimes of missing the point of the Bible and reading it academically when it is meant to be read with "simple naive and childlike faith"? That is not to pay down the need for some care with some passages of the Bible, but to acknowledge that "too much analysis can lead to paralysis" when it comes to stullifying faith and damping down zeal.
2. The point is that Christ's promises in particular should be taken at face value much of the time, for the "kingdom of heaven belongs to such as these (children)" (Mark 10: 14-15)
3. One of the major problems is of course what to do when we do take prmises at face value, show naive childlike trust in God, and then find that nothing happens? We can, as i have done, over examine things and interrogate myself whetehr the conditions were right, my motives wrong or, as all too often is the case, the Bible actually can be understood in that way. I wonder if that is, however, the right approach? Is that the way trust runs between child and Father? Better surely to shrug our shoulders, say "Father knows best" and just carry on, regfusing to allow ourselves to stop trusting Him and asking Him to show us if we went wrong or it was a matter of "no" or "not now" or of "keep praying"..
4. Sometimes I wonder whether our early prayers, when we first started to believe, so encouraged us that we matbe began to become a bit selfish? "If God answers prayer I can ask for anything" sort of approach. Certainly sin can creep in and adulterate our faith and our subsequent praying.

Ultimately we should "keep praying and not lose heart" (Luke 18:1) although most of us do sadly, or simply put down our early efforts as just coincidence or a foolish and childlike reading of the Bible. How much prayer and power is lost in the process? How much more could God have accomplished if we had just, at least in respect of prayer andthe Bible, stayed little children?