Albania and the resurgence of Christianity 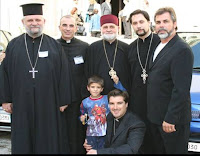 What can we learn from a country that abolished religion? Two visits and a pilgrimage to Albania have raised this question sharply for me. In 1967 the Communist dictator Enver Hoxha declared Albania to be an officially atheist state and banned all religious practice, both Christian (Orthodox and Catholic) and Muslim. Hoxha was far more thoroughgoing in his desire to extirpate religion than Stalin. Stalin closed churches and monasteries and banished bishops and priests, monks and nuns to appalling labour camps. One of these was the great monastery on the Solovki Islands in the White Sea, which was turned into an appalling labour camp, where thousands suffered excruciating hardships from a regime of hard labour, bitten by fleas and lice in the winter and mosquitoes in summer, or frozen from the extremes of cold of the arctic winter. Lenin’s portrait was hung over the former altar, with the inscription: “We are showing mankind a new road, Labour will be the master of the world.” Yet Stalin kept the Church in being, using it and manipulating it as it suited. Hoxha simply abolished it. Albania was atheist, and that meant no religion. Orthodox priests had their beards publicly shaved off. Priests who performed surreptitious baptisms were imprisoned. Those who had names with a religious significance were ordered to change them. If parents secretly prayed before an icon it had to be done in a wardrobe or cupboard lest they were seen or heard by their children, and children talk. A Roman Catholic priest had his hands and feet cut off, and his mother begged his torturers to shoot him rather than let him live in that condition.
For almost 30 years Hoxha’s iron grip kept Albania isolated and atheist. Yet the ideology he professed did not go deep. His paranoia about invasion peppered the countryside with ugly concrete pill-box bunkers. Since he died and the Communist regime was overthrown, there has been a remarkable flourishing of religion. There are new churches and new mosques. Tirana’s international airport is named after the most famous Albanian of all, Mother Teresa. Old churches locked up and used as warehouses are back in use, and the wonderful frescoes that many of them contain can once more be seen. I asked a priest in a small town in the south of the country how many baptisms there had been. The answer was 4,000. Metropolitan Anastasios, the Orthodox leader, is an inspiration not only in prayer and the spiritual life but in building churches, initiating social work, teaching children, caring for the elderly and in interfaith relations.

On pilgrimage last month we met two new and young bishops. I asked Bishop John of Korçe to tell his story. “I was brought up on nothing,” he said. “I could not find any meaning in life. Then, when I was 17, a friend gave me a book. It was a Gospel, though I did not know it, but when I read it I found both joy and meaning, and without joy and meaning there is no life.”

That is a story of resurrection, of the discovery of that life that Jesus said he came to share: “I came that they might have life, and have it in all its fullness.” Blank nothingness and arid atheism was surprised by joy and by grace. As a Christian leader in his city, Bishop John makes sure that he is seen walking each month with the mufti, the Muslim leader, for where the memories may have been of religious antagonism and conflict those memories need to be healed.

There is much to learn from this country where religion was abolished, about martyrdom and faithful witness, and the preservation of faith in secret in the darkest times. There is much to learn about the deep rhythm of Christian life that is always, like the life of the Lord from which it springs, “Crucifixion-Resurrection”. It echoes what Edwyn Hoskyns wrote many years ago in his Cambridge Sermons. “The Church has always a dagger at its heart, for it cannot long escape from its own theme — Christ Crucified.” God, Hoskyns said, “is not the God of the Jews only, but of the Gentiles also, of the anti-clericals and communists, of all the ‘movements’ which tingle with resentment against the Church. Crucifixion- Resurrection is therefore the song that is sung, whether it is recognised or not, by the whole world of men and things in their tribulation and in their merriment.” The resurrection of the church in Albania may teach us just that.
From an article by the Right Rev Geoffrey Rowell, Bishop of Gibraltar in Europe