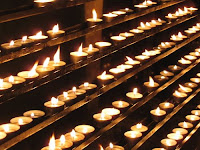 Here are a few more quotes and an illustration on the subject of hope:

If you do not hope, you will not find what is beyond your hopes.
Clement of Alexandria

If you feel like you're at the end of your rope, tie a knot and hang on! Because God's a God of miracles, and He's holding the other end.
Pat Hicks

A number of years ago researchers performed an experiment to see the effect hope has on those undergoing hardship. Two sets of laboratory rats were placed in separate tubs of water. The researchers left one set in the water and found that within an hour they had all drowned. The other rats were periodically lifted out of the water and then returned. When that happened, the second set of rats swam for over 24 hours. Why? Not because they were given a rest, but because they suddenly had hope!

Those animals somehow hoped that if they could stay afloat just a little longer, someone would reach down and rescue them. If hope holds such power for unthinking rodents, how much greater should is effect be on our lives.

I am not a connoisseur of great art, but from time to time a painting or picture will really speak a clear, strong message to me. Some time ago I saw a picture of an old burned-out mountain shack. All that remained was the chimney...the charred debris of what had been that family's sole possession. In front of this destroyed home stood an old grandfather-looking man dressed only in his underclothes with a small boy clutching a pair of patched overalls. It was evident that the child was crying. Beneath the picture were the words which the artist felt the old man was speaking to the boy. They were simple words, yet they presented a profound theology and philosophy of life. Those words were, "Hush child, God ain't dead!"

That vivid picture of that burned-out mountain shack, that old man, the weeping child, and those words "God ain't dead" keep returning to my mind. Instead of it being a reminder of the despair of life, it has come to be a reminder of hope! I need reminders that there is hope in this world. In the midst of all of life's troubles and failures, I need mental pictures to remind me that all is not lost as long as God is alive and in control of His world.
Posted by My name is Mark Williams. at December 06, 2010