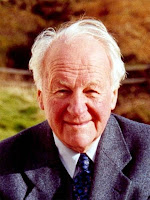 The following is an excerpt from John Stott's excellent book "Christ the Controversialist" and decribes teh difference between a luke warm 'believer' and the real article. It certainly challenged me.

"The biblical way of salvation is clear. As with the Pharisee and the publican, as with Saul and Paul, so too with us: God accepts us sinners not because of any work or supposed merit of our own, but because of His own mercy, on the ground of Christ's finished work in which by grace we put our trust.

John Berridge, the eighteenth-century Vicar of Everton in Bedfordshire, is a good and more modern example of the same continuing alternative. In his book Christian World Unmasked, a dialogue between two imaginary characters about the way of salvation, he writes this: "Once I wnet to Jesus as a coxcomb ("a conceited swaggering fop" - Penguin English Dictionary), and gave myself fine airs, fancying, if He were something, so was I; if He had merit, so had I. I used Him as a healthy man will use a walking-staff - lean an ounce upon it, and vapour with it in the air. But now He is my whole crutch; no foot can stir a step without Him. He is my all, as He ought to be if He will become my Saviour, and bids me cast all my care on Him.'

John Berridge also wrote his own epitaph for his own gravestone. It describes the main stages of his spiritual pilgrimage. It reads:

Here lie
the earthly remains of
JOHN BERRIDGE,
late vicar of Everton,
and an itinerant servant of Jesus Christ,
who loved his master and his work,
and after running on his errands many years
was called to wait on him above.

READER,
Art thou born again?
No salvation without new birth!
I was born in sin, February 1716.
Remained ignorant of my fallen state till 1730.
Lived proudly on faith and works for salvation till 1754.
Was admitted to Everton Vicarage, 1755.
Fell asleep in Christ, JAnuary 22, 1793.

John Stott adds: "Quaint, even a trifle eccentric, John Berridge's testimony may seem, but his theology and his experience shold be shared by every Christian believer. Jesus Christ, the sinbearing Saviour, must be the only 'crutch' on which we also lean, the only 'refuge' to which we flee."
"Christ the Conrtoversialist pages 122-123

This is great, dad. I love the last bit of Berridge's epitaph "Fell asleep in Christ". I think I'd want that on mine.

In Essentials Unity, In Non-Essentials Liberty, In All Things Charity

There is an old religious joke that has been doing the rounds for years which goes like this:`` I was walking across a bridge one day, and ...