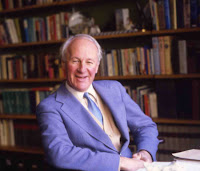 Stott was born in London to Sir Arnold and Emily Stott. Sir Arnold Stott was a leading physician at Harley Street and an agnostic, while his wife was a Lutheran church-goer who attended the nearby Church of England church, All Souls, Langham Place. Stott was sent to boarding school at eight years old — initially prep school at Oakley Hall. In 1935, he went on to Rugby School.

While at Rugby School in 1938, John heard Rev. Eric Nash ('Bash') deliver a sermon entitled, What Then Shall I Do with Jesus, Who Is Called the Christ? After this talk, Bash pointed John to Revelation 3:20, "Behold, I stand at the door, and knock: if any man hear my voice, and open the door, I will come in to him, and will sup with him, and he with me." Stott later described the impact this verse had upon him as follows:

"Here, then, is the crucial question which we have been leading up to. Have we ever opened our door to Christ? Have we ever invited him in? This was exactly the question which I needed to have put to me. For, intellectually speaking, I had believed in Jesus all my life, on the other side of the door. I had regularly struggled to say my prayers through the key-hole. I had even pushed pennies under the door in a vain attempt to pacify him. I had been baptized, yes and confirmed as well. I went to church, read my Bible, had high ideals, and tried to be good and do good. But all the time, often without realising it, I was holding Christ at arm's length, and keeping him outside. I knew that to open the door might have momentous consequences. I am profoundly grateful to him for enabling me to open the door. Looking back now over more than fifty years, I realise that that simple step has changed the entire direction, course and quality of my life.

Stott was mentored by Bash, who wrote a weekly letter to him, advising him on how to develop and grow in his Christian life, as well as practicalities such as leading the Christian Union at his school.

Stott studied modern languages at Trinity College, Cambridge where he graduated with a double first in French and Theology. At university, he was active in the Cambridge inter-collegiate Christian Union (CICCU), where the executive committee that ran it considered him too invaluable a person to be asked to commit his time by joining the executive committee.

After this, he transferred to Ridley Hall Theological College, Cambridge, so he could become ordained as an Anglican clergyman.
Posted by My name is Mark Williams. at April 10, 2010