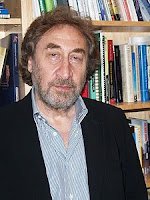 I came across this superb article by novelist Howard Jacobson in the January 23-29th edition of the Radio Times. It is meant to introduce a new series on the Bible starting soon on Channel 4. It is worth reading in its entirety and so I won't spoil any one's reading of the entire piece or risk a Law suite from the BBC for publishing something without their permission.

What I like about what Howard Jacobson writes is that it says the things which you already knew at some deep level but did not have the skill or wherewithal to articulate. This is Jacobson's - and others like him - gift. He puts his finger on the button and says what needs saying about the whole New Atheist rant. Here is a taster:

"Some of my best friends are atheists. And I always supposed I was, or would end up, an atheist myself. I have never been close to possessing anything that could be called religious belief. I don't worship, I don't pray and I don't take part in religious festivals. And yet somehow the religious beliefs or instincts of other people - not just people I know, but writers, philosophers, artists - fascinate me. Not because I recognise something of myself in them, but because I don't. It's from those who are most different to you that you have the most to learn.

This is why I have no time for the new aggressive form of popular atheism. It lacks imagination and, worse still, it lacks curiosity. It doesn't think it has anything to learn from anybody who is not an atheist sine, in its view, religion is for fools or children - something mankind needed at the dawn of time but needs no longer because now we have science and Richard Dawkins.

Dawkins is an angry man. I sympathise with some of that anger. When you see "believers" piloting planeloads of innocent passengers into crowded office buildings in the name of God, you are right to question the validity of belief. But you don't need God's encouragement to be a fanatic. Islamic terrorism might find a spurious justification for itself in the Koran, but it learns its lessons from the godless ideologies of the likes of Stalin, Hitler, and Pol Pot, not the Bible. It's conviction tat kills - the determination to make a single, simplistic view of the world prevail - not theology. Which is why the last thing we want from those whose function it is to doubt and question is the same old certainty under another name."
Posted by My name is Mark Williams. at January 23, 2010