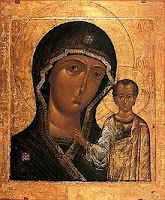 In one of my other blogs (see 'One Pearle') I published a sermon I gave recently which sought to take another look at Mary who, in some quarters, is not just ignored but treated with something bordering on vilification. Some protestants eager (and quite rightly) to safeguard the uniqueness of Jesus, have downplayed the role of Mary to something along the lines of a human incubator, used for the purpose of bringing the Saviour into the world and then subsequently disgarded. I understand this attitude because for many years it was my own. It is only through my study of Church history and by taking another look at the Holy Scriptures that I have come to change my mind.

In my sermon I argued that Mary can, without compromising the deity of Christ, be justifiably and biblically called the 'Mother of God' (Gk 'Theotokos'). In fact to call her such is to actually protect the deity of Christ, something it was calculated to do so by the early Church at Ephesus in AD 431 (see http://en.wikipedia.org/wiki/Theotokos). I also argued that as a result of this we should honour Mary and call her 'blessed' as she prophesied future generations would in Luke 1:48 (Elizabeth also referred to her as such earlier in the chapter at verse 45). In the words of a fifth century hymn she is, justifiably, "more honourable than the cherubim and more glorious beyond compare than the seraphim".

This understandably brought a response from some members of the congregation - something it is always good to see - and one person quoted the passage from Matthew 12:46-50 in which Jesus appears to 'put Mary in her place' after she had called with Jesus' 'brothers' (relatives) to see Him. When told they were outside waiting to speak with Him Jesus replied: "Who is My mother and who are my brothers?" And He stretched out His hand towards His disciples and said, "Here are My mother and My brothers! For whoever does the will of My Father in heaven is My brother and sister and mother." (verse 48-50)

Looking at the text it does appear as if Jesus is placing Mary alongside everybody else in importance, but that may be to read into the text a predisposed bias against her. No one comes to the text of the Bible completely objectively. We are all taught and influenced by someone and something. If we have been brought up to read the Scriptures a certain way by preachers and teachers who themselves have been taught to regard Mary as of no importance then understandably it will influence how we read the text in front of us.

Looking at it again isn't it also possible to understand that Jesus is just using - as He often did - an incident involving His mother and relatives' presence to make a different point i.e. that everyone can belong to His spiritual family if they obey the will of His Father? Surely that is His point in saying what He said rather than a kind of put-me-down to keep Mary in her place and ensure that all future generations would do the same? And as with interpreting every passage of Scripture, particularly where it is possible to read it in several conflicting ways, we need to ask the question: Whose interpretation is the correct one and on what authority can they claim they are right?
Posted by My name is Mark Williams. at August 17, 2009