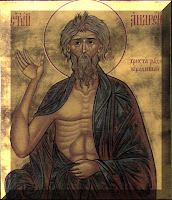 Yesterday was April Fool’s Day and the following is a broadcast talk I gave on a local radio station called Radio Tircoed (check out the station on the internet at www.radiotircoed.com):

“Happy April Fool’s Day – if that is the correct greeting – on te day when we try and make fools of one another. We only have until twelve o’clock to do so however, for after that it is considered bad luck or bad form to try. SO for twelve hours we can all be fools.

But throughout Christian history there are those who have deliberately become fools – not for twelve hours a year – but as a chosen lifestyle. History has known then as “Fools for Christ” or “Holy Fools” and it has a long and noble tradition. (The picture to the left is St. Andrew)

The whole thing could said to have been started by St. Paul (although the Old Testament has its fair share of fools for God, Ezekiel being perhaps the best known). He was the very first self-styled ‘fool for Christ’. In his firts letter to the wayward Corinthian Church, for example, in Chapter 4 verse 10, he is in the middle of explaining what it is that apostles go through for their master in contrast to the Christians at Corinth. We begin at verse 10:

“For it seems to me”, he writes, “that God has put us apostles on display at the end of the procession, like men condemned to die in the arena. We have been made a spectacle to the whole universe, to angels as well as to men. We are fools for Christ, but you are so wise in Christ! We are weak, but you are string! You are honoured, we are dishonoured! To this very hour we go hungry and thirsty, we are in rags, we are brutally treated, we are homeless. We work hard with our own hands. When we are cursed, we bless; when we are persecuted, we endure it; when we are slandered, we answer kindly. Up to this moment we have become the scum of the earth, the refuse of the world.”

And there in that short passage, the whole idea of becoming a “fool for Christ” is born and men and women throughout history have deliberately, like Paul, chosen the path of foolishness as a way of drawing themselves and others, closer to God.

What form did this so called foolishness take? Often it was simply living according to the teaching of Jesus which itslef was considered at odds with the world around it. St. Anthony the great (251-356 AD) who was considered the founder of Christian monasticism once wrote:

“Here comes the time, when people will behave like madmen, and if they see anybody who does not behave like that, they will rebel against him and say: “You are mad” – because he is not like them.”

So just to behave as a follower of Jesus who did not follow the conventions of the day, who refused to fight because Jesus said to love your enemies; who remained faithful to one wife,; who would not acknowledge Caesar as a god even at the risk of his or her own life and who followed a crucified saviour, would be considered a fool in the eyes of many who did not believe. In fact the very message Christians preached was, for the sophisticated Greeks and Romans, sheer nonsense. Again St. Paul’s first letter to the Corinthians, Chapter 1 verse 18:

“For the message of the cross is foolishness to those who are perishing – i.e. those who reject it – but to us who are being saved it is the power of God.”

Alternatively there have been those who have taken the notion of foolishness literally and through their bizarre behaviour sought to draw attention to the Christian message.

I remember in my college years being told about the rather fascinatingly named 12th century saint Christina the Astonishing who would throw herself into fires or freezing water and purportedly was able to smell the presence of sin on people.

Another was St. Simon Stylites (390-459) who for thirty seven years lived on a tall stone column in the desert near Aleppo, Syria, fasting and praying. Such was his holiness that people came for miles around to seek his council, and barren women would conceive if they came within range of his preaching.

Whatever form it took, the holy fool would be someone who defied convention for the sake of Christ and would stand out from and apart from the crowd.

But what of today? Who are the fools for Christ in 0ur midst? Well simply it is anyone who follows the teachings of Jesus today and is willing, like the fools of yesteryear, to make a stand for his/her faith. In a society where sex before marriage is the norm – a kind of “try before you buy”; where in too many cases abortion has become a perfectly legitimate way out of the inconvenience of an unwanted and unplanned baby; where living together is a socially acceptable alternative lifestyle; where creeping euthanasia is leading slowly towards legalisation; anyone who does the opposite or refuses to comply and conform is deemed foolish and unconventional.

So for the Christian, April Fool’s day is a day like any other, for we are always – or should be – fools for Christ.