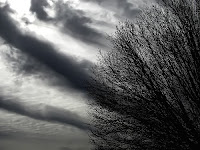 It’s been a rather lacklustre day. The sky outside is almost uniformly grey except for some lighter and darker shades of the same colour. A watery and rather dull sun is trying to peek through wherever there’s a gap. I am joined here in the dining room by two animals. One is a rather large dun coloured cat affectionately known as “the Rat”. He is lying flat out on a large cushion in front of the radiator (which is on) making a low moaning noise which I take to be snoring. Alongside is Jack our black and white dog. He is licking his genitalia in a rather absent-minded kind of way a bit like you or I would scratch an eyebrow or absent mindedly straighten a tie. Why do they do that? I must try and google it sometime although what would you put? Dog, genitalia, lick? Might be interesting or, more likely, vulgar. I shall resist the low-level temptation to try.

We are not the only life in the building – a Vicarage – right now. Laughing her way (she is watching a cartoon on Sky) through sniffs and swallows is my fifteen year old daughter Ruth. She is home suffering from the very same cold she very generously gave to me earlier in the week. For the past two days we have both been laid up as we ran the rapids of a rather large volume of phlegm and other debris which has flowed with alarming regularity from our chests and noses. Where does all that come from? What is it? I resist another urge to google for an answer. Some things are best left out there on the ether.

Its been a rather lazy day. This morning I emerged from a fitful sleep, had a cup of tea followed by a bowl of branflakes and watched some mind-numbing morning TV. Later I read Morning Prayer and watched Ironman on my desktop, pausing halfway to make a cup of coffee. All this was interspersed with texts and phone calls from my wife Hazel and my son Ben who currently lives in Brighton. This in turn was followed by a cup of Earl Grey and a few slices of homemade fruitcake as I opened this blog.

All of these are the moments which collectively make up my day and, strung together, make up my life. They are rather odd building blocks aren’t they? I mean what do they build and what are they meant to achieve? Are they important events and do they contribute anything to the great scheme of things? I don’t know. All I do know is that they represent a part of my life lived and gone. I wonder what ‘the Rat’ is dreaming about? (Written December 4 2008)