The borderlands of belief 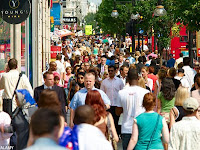 Talking to people is part of my calling. Whether it is a bereaved family, someone wanting to get married, have their child baptized, or casual chats at special events. What I find fascinating about all of this is just how interested people are, still, about life, death and the supernatural. The sad thing however is that it appears that either people (meaning in some cases clergy) aren't listening to them or are not prepared to give them any sort of an answer to the questions these things raise.

Now this may be down to ignorance or a lack of resources or even a fear that they don't know enough to say anything. I understand that. When I came out of theological college I thought I had all the answers to all sorts of questions. The problem however, I soon discovered, was that folk weren't asking the questions I had learnt the answers for! They were not particularly bothered with who wrote Mark's gospel or whether the filioque should be included or excluded from the Nicene Creed. They were, and are, more concerned in the first place about what happened to dad when he died or what did I think about near death experiences or is there a heaven and what is it like, or did I believe in ghosts? That's not to say that questions about science and faith, or whether the Bible is true, or were there really such people as Adam and Eve, did not matter to them. They do. But people generally are not in that place yet. Instead they are concerned with the immediate - the things that affect their lives. The other questions are there, but that comes later. For now what do I think about angels, coincidences or strange happenings in the dead of night?

In years past I would have muttered something or tried to yank the conversation around to a topic I was more familiar or comfortable with. Now however, with the growing number of such conversations about the weird and wonderful, I find myself beginning to ask the same sort of questions.

For example over the last six months or so there have been a flurry of calls from people who would not normally be seen dead inside a church (or maybe that's the ONLY way they would be seen in one) calling me or my fellow clergy up asking us to come and investigate odd occurences. For example the appearance of apparitions, cold-spots in centrally heated houses, or strange noises or moving objects. I have - with another clergyman - visited such places, prayed, thrown holy water and blessed rooms in a bid to stop these things. Amazingly each time it has worked. But what I have experienced is only the tip of a very large iceberg and if someone feels sufficiently relaxed in my company to speak about it, it is surprising how many people have experienced similar things. So time and involvement has made me more open to listening to those who wish to share their stories and I am beginning to slowly understand where God fits in with all of this.

A few years ago Philip Yancey a Christian author and journalist wrote a book called "Rumours of another world". It is subtitled "for those on the borders of belief". This is what he writes in his 'note' at the beginning of the book:

"I wrote this book for people who live in the borderlands of belief... In matters of faith, many people occupy the borderlands. Some give church and Christians a wide berth yet still linger in the borderlands because they cannot set aside the feeling that there must be a spiritual reality out there. Maybe an epiphany of beauty or a sense of longing gives a nudge towards something that must exist beyond the everyday routine of life - but what? Big issues - career change, the birth of a child, the death of a loved one - raise questions with no easy answers. Is there a God? A life after death? Is religious faith only a crutch, or a path to something authentic?"

Those I talk to occupy these "borderlands of belief". As the tide of Christianity has gone out in the West they have lost their faith and the ability to speak its language. But they use other words and other pictures to try and capture what it is they long for but cannot tie down. They repeat these stories of supernatural encounters as a way of articulating their desire for what is behind it all. They have glimpsed it - or Him - but they are unsure as to how to progress. They are left with the story but they cannot grasp its meaning. We must listen to them, hear them out, and help them listen to the God who is speaking their language. It may not be ours, but we must learn it if we are to help.
Posted by My name is Mark Williams. at May 15, 2009